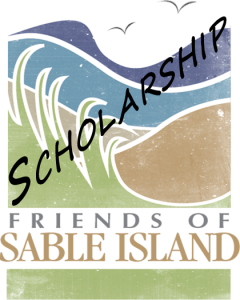 In keeping with our mission to promote Sable Island through education, the Friends of Sable Island Society was pleased to again offer a $1,000 scholarship to a Nova Scotia student.

Congratulations to Cameron Penny of Riverview High School for the video ‘An Un-Sable Balance’. The video and reflective statement are below. They show inspired creativity while providing a valuable lesson on Sable Island’s fragile fresh water supply.

We would also like to give honourable mentions to (in no particular order) Daniel Peraza, Katelyn McPherson, Margaret Schofield for their excellent submissions. You made the Selection Committee’s job a tough one. Their submissions are below.

Thank you to everyone who made a submission.  We hope you learned something new and amazing about Sable Island in the process.

Growing up on Cape Breton Island, I spent many summer days boating and exploring many of the small islands on the Bras d’Or Lakes with my family. I enjoyed snorkeling in the pristine waters around these islands and viewing the marine life.
On summer evenings after the sun had set, we listened intently over the campfire to seafaring tales which occurred along Nova Scotia’s coastline centuries ago. Known as the graveyard of the Atlantic, Sable Island featured prominently in these storytelling sessions. The ever-changing sea conditions and shape-shifting dunes of this island have greatly impacted the fishing and marine transportation industries.
Islands are secluded, wondrous places that seem to transport us to another time and place where prior obligations have no relevance. During my research, I soon realized how fragile this ecosystem is considering there is only one solitary source of fresh water. Despite the play on words used in the title, there is a significant threat to the habitat and wildlife of Sable in terms of biological prosperity and stability.
Entering into an undergraduate science program this fall, with a planned focus in biology, I believed it fitting to discuss the viability of an incredible ecosystem like that of Sable Island. It became obvious to me that the freshwater resources on Sable Island can be greatly comprised by adjacent offshore oil and gas exploration. This provided the motivation to create the video ‘An Un -“Sable” Balance’. For me, it proved to be an energetic and effective way to showcase the biological importance of Sable’s supply of freshwater and the associated modern-day human influences upon nature. Through public education, I believe it is possible to ensure the long-term success of Canada’s 43rd national park and masterpiece, Sable Island.

Note from Friends of Sable Island: The video on the freshwater resources of Sable Island was very well done.  The recycling, distribution, and vulnerable nature of the groundwater and pond resources were well presented.  However the discussion of potential sources of contamination was misleading and focused on the off-shore petroleum activities.  The real threat of contamination of the freshwater resources on the island is not from the off-shore oil and gas exploration activity, but rather it is from on -shore uses of various toxic chemicals, including hydrocarbons that have been used on the island for over 110 years. Current environmental assessments are in the process of delineating the foot prints and nature of soil and water impacts from historic uses, misuses, spills, and improper disposal of these substances.

Sable Island, Canada’s 43rd National Park, is one of Canada’s most beautiful treasures. My parents immigrated to Canada in 1991, and I was born in Nova Scotia. Nova Scotia is now a part of my family’s history and future legacy. Sable Island’s rich history and resources adds to the tapestry that is Nova Scotia, my home. I enjoy learning of the many species of animals and plants that are protected by Sable Island’s preservation. I believe it is important to protect and document all aspects of Sable Island wildlife for the benefit of future generations.

I have applied for your generous scholarship because I have been accepted into the Diploma in Engineering program at St. Mary’s University for the autumn of 2015, and am now in the process of securing the funds to fulfill my financial needs for the upcoming academic years. Obtaining this scholarship will allow me to realize my long-term goal of a degree in Engineering, followed by a successful career. These funds will help alleviate the burden of financial debt I face by choosing to further my education at a university level. If I am awarded the Sable Island Scholarship, I will continue to apply the same focus to my collegiate studies, as I have to my high school studies. I believe I will be a positive representation of your generous scholarship program.

I chose to create a visual narrative of Sable Island that is interspersed by facts. I have always loved sketching and the mystery and romanticism that surrounds Sable Island was my inspiration. Through online photos and knowledge of the Island I created illustrations that spoke about the history of Sable Island along with showing its’ natural beauty. Sable Island is a national treasure and with its national park status it will be enjoyed by generations to come.

Sable Island has become a mysterious place mainly due to the amount of shipwrecks that have been recorded. Over 350 shipwrecks have been recorded since 1583. A mysticism and sense of tragedy surrounds the Island. I was intrigued by the story of the first settlers who were a band of criminals, vagabonds and beggars from France. In one sketch of an underwater shipwreck I portrayed a happier time in the lives of the men, women and children who were onboard. The ghosts of the passengers are seen dancing amidst the sunken ship. Most Nova Scotians share a seafaring heritage. The sea provides livelihood for many but it commands respect.

I have gained an immense appreciation for the natural, preserved beauty of Sable Island through doing this project. It has a romantic, mystical quality that is truly Canadian in spirit. I would love to visit the Island someday and witness firsthand the beauty I have tried to capture in my sketches.

Margaret Schofield – In Our Hands

I was first introduced to Sable Island through school where I learned of its delicate ecosystem and completed many school projects relating to the island. I was always fascinated by it and as a result, my interest continued to develop. Nova Scotia is known for Sable Island, but it’s not a tourist attraction or something we visit, it’s much more. Sable Island is a place containing nature’s music, solitude, and a place that we would only dream to escape to.

This scholarship is an opportunity to expand my current knowledge of Sable Island, while it would also help finance my post secondary education. I decided to do a pencil drawing for my submission to demonstrate the overlap between land and people. I knew I wanted to convey the island’s fragile ecosystem as well as expressing the pure and numinous milieu. In my drawing, Sable Island is enclosed in a glass globe being held by hands which represent the support we give Sable Island. I included Roseate Terns in and out of the globe because if the delicate ecosystem were to become unbalanced- represented by the crack- then the birds will no longer be a part of the unique qualities of the island. The grey seal is symbolic of all animal life that depends on the island’s sole existence. When observing the image as a whole, I wanted the viewers to not only have an understanding of Sable Island, but too get a deeper, more personal sense when viewing this artwork.